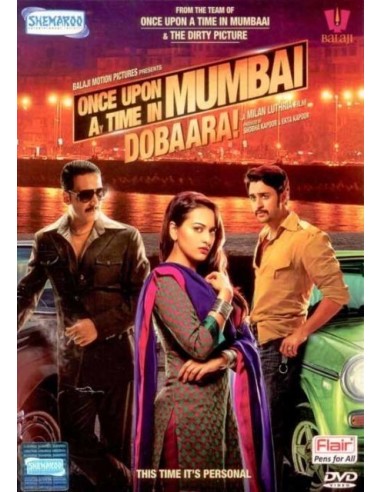 Once Upon Ay Time In Mumbaai Dobaara DVD

Synopsis:
A mafia king, Shoaib (Akshay Kumar) - flamboyant, suave and awe-inspiring, is powerful, connected and rubs shoulders with the rich and famous. He often visits the poor areas where he grew up and on once one such visit he watches a cart race. He takes the winner of the race, Aslam (Imran Khan), and the latter's best friend under his wing.

Aslam becomes Shoaib's favourite. There is an attempt on Shoaib's life by his arch adversaries, sparking off a major battle between the two factions. Eventually, his adversaries join hands with a cop, whose sole objective is to annihilate Shoaib's reign.

A chance encounter with Jasmine (Sonakshi Sinha), an aspiring and beautiful actress, puts Shoaib in touch with the softer side of himself. Aslam also ends Jasmine and an awkward friendship develops between them. While Shoaib dies everything to woo Jasmine, Aslam shows her the simpler things in life. Shoaib and Aslam both profess their love for Jasmine on separate occasions. When Shoaib sends Aslam to pick up Jasmine, Aslam agrees, without realising that he going to pick up the very girl he loves!

Just then there is an attack on Jasmine's life....