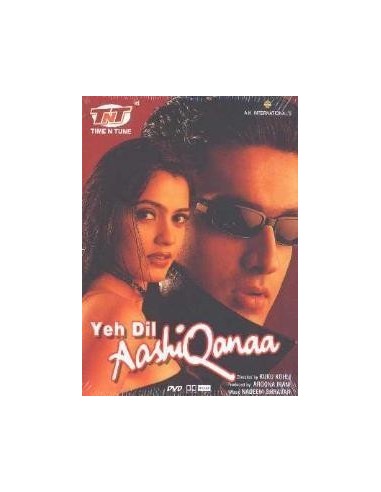 Synopsis:
YEH DIL AASHIQANAA is set against the backdrop of terrorism. It's the story of Karan (Karan Nath) and Pooja (Jeevidha), who are studying in the same college in Pune. They fall in love and everything seems to be going fine till one day, while visiting her brother in Mumbai, Pooja's flight is hijacked by a group of terrorists, following the arrest of their leader Ashraf-ul-Haq Mallik.

Ironically, this hijack has been engineered by Pooja's brother Vijay Varma (Aditya Panscholi), who is in league with the terrorist head Akhmash Jalal. Vijay is unaware of the fact that his beloved sister is on board the same flight. When he realises this, he is unable to do anything as Akhmash forbids him from doing anything that would jeopardise their mission.

Karan daringly risks his life and rescues Pooja and the other passengers, thus inviting the wrath of Akhmash and Vijay. Akhmash is now out to kill Karan. On the other hand, Vijay puts his foot down when Pooja reveals her intentions of marrying Karan.

Pooja and Karan decide to escape, but they are chased and nabbed by Akhmash and his men and held captive in his den. Akhmash then tries to blackmail the Indian government by demanding the release of his leader Ashraf-ul-Haq Mallik as ransom for the lives of Karan and Pooja.

Does the Indian government bow down to the terrorist's demands? Does Karan succeed in getting Pooja out of the clutches of the terrorists? Are the lovers united?