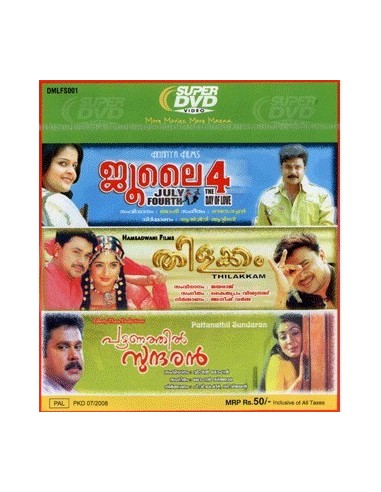 Synopsis:
July 4:
The story begins in a jail. Ramachandran, a very agile police officer takes charge as the Jail Superintendent. He is given a brief about the jail and the prisoners by Narayanan Potti, who is the jailer there. One day Ramachandran comes face to face with Gokul Das, one of the prisoners lodged there who is to be released soon, on July 4th. It is them revealed that the very reason why Ramachandran had taken charge of the jail is to meet Gokul Das, with whom he has some old scores to settle. From here unfurls, in flashback sequences, the story of Gokul Das...
Thilakkam:
Padmanabhan Master (Nedumudi Venu) and his wife (K.P.A.C Lalitha) wait for Unni, their only son who is missing for many years. 10 year old Unni got lost in the crowd during a temple festival where he was along with his neighbour Panikkar (Oduvil Unnikrishnan). Panikkar too did not return since he decided to return only after finding Unni. Ammu (Kavya Madhavan) is Panikkar's daughter who also believes, like master and his wife, that her father will return one day with Unni. Panikkar finds Unni and brings him back to the Village. The villagers realizes that Unni is abnormal and is mentally challenged. He behaves like a small boy and creates all sorts of trouble for the villagers and his parents. He is given Ayurveda treatment under the guidance of the church priest (Jagathy Sreekumar). Ammu looks after Unni, which her cousin (Nishant Sagar) objects to, as he loves her. But finally Unni gets back his memory only to let out the truth that he is not Unni but Vishnu, the son of a Bangalore don.
Pattanathil Sundaran:
The story is about Kizhekkadathil Sundaresan (Dileep), a ration shop owner who marries a girl Radhamani (Navya), who is more qualified than him. Radhamani is an M.A graduate, while Sundaresan hasn't gone to college. She has to agree for this marriage due to "chovvadosham". After marriage when Radhamani gets a government job as a clerk in the state secretariat, Sundaresan's ego is hurt! The fun begins as Sundaresan is forced to accompany his wife to Thiruvananthapuram. While she works he has to stay at home...