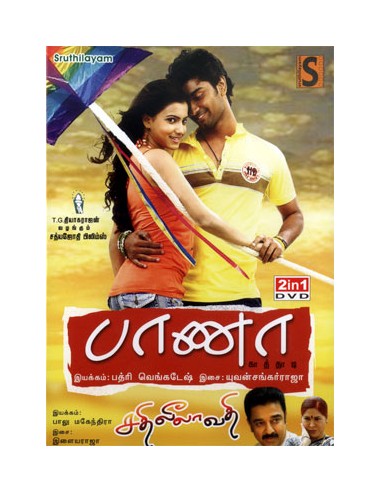 BAANA KAATHAADI
The story begins in the backdrop of the Chennai slums and here is Ramesh (atharva) a plus 2 student. His only passion in life is kites and he would not hesitate to do anything about that. An incident leads him to chance upon Priya (samantha) and by mistake, her pen drive ends up with him. Eventually, that leads to trouble for Priya at college and she manages to trace Ramesh. The initial scuffle goes onto friendship between both and Ramesh falls in love with her. However, a twist happens and Priya leaves him and goes. On the other hand, Ramesh also becomes a witness to a murder committed by the local goon Ravi (prasanna). What happens from there forms the rest of the story.

SATHI LEELAVATHI
Arun (Ramesh Arvind) is married to Leelavathi (Kalpana) in a forced marriage. He is embarrassed by his wife's plain looks and her weight. When he meets Priya (Heera Rajagopal) - who works in a building construction company, he hides from her the fact that he is married and has an affair with her.

When he takes Priya with him on a vacation to Bangalore, he bumps into his old friend Dr. Sakthivel Gounder (Kamal Haasan) - an orthopedic surgeon from Coimbatore who is also in Bangalore with his wife Palani (Kovai Sarala) and his son Anand - travelling with him in the same flight and even staying in the same hotel. Sakthivel is called to Arun's room in the night - as Arun has slipped his disc and the hotel doctor is unavailable - and bumps into Priya, thus finding out about the affair.

After returning to Chennai, Priya finds out that Arun is married, but decides to continue with him when Arun says he was forced into marriage and promises to divorce his wife. When Arun's wife Leelavathi discovers Arun's affair, she has a huge showdown which leads to Arun leaving the house. Then, Leelavathi plans a series of dramas which makes Priya hate Arun. She does this with the help of Sakthivel, her father-in-law, children and Priya's old lover (played by Raja in a small role). Finally Priya unites with her old lover apologizing to him and Arun unites with Leelavathi.