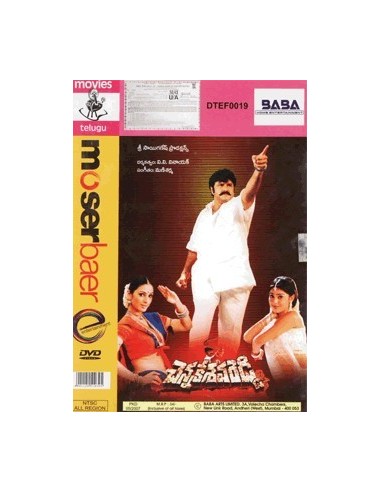 Synopsis:
Bharat (Balakrishna) is a sincere and dedicated police officer in Mumbai. In a short span of time he is regarded as a fearless officer who could single handedly bring the guilty to the justice. Preethi (Shreya) is a medico and daughter of Police Commissioner Prasad (Vizag Prasad). She falls head over heels for our Mr Bharat, but this does not make any difference to the storyline of present stream of faction backdrop movies.
Meanwhile another super cop, Sivakrishna working in Rayalseema region of Andhra Pradesh becomes person in news as daring and dashing police officer who never bows his head to politicians. Inevitable Sivakrishna becomes an itch to local faction leader, Dhanunjaya Reddy (Anantraj) who runs a parallel government in that region. When Sivakrishna falls victim to the political clout of Dhanunjaya Reddy he is demoted and transferred to Tihar Jail as lower rank officer. In between we are shown a statue of Chenna Kesava Reddy who is considered as a man of high respect in the region and is missing for the past 22 years.
Sivakrishna finds Chenna Kesava Reddy in Tihar Jail being imprisoned on some false case. Sivakrishna makes every effort to get Chennakeshava Reddy released. When Chennakeshave Reddy returns to his village after 22 years, he is pompously welcomed by one and all. Chennakesva Reddy halts the factionalist activities of Dhanunjaya Reddy and his henchmen.
After knowing the return of Chennakesva Reddy his wife and son come to see him. Now the movie turns into flash back, in which Chennakeshava Reddy is shown as a generous and the most revered man in the village but has rivalry with Venkata Reddy (Jayaprakash Reddy). In one of the worst spar between the rivals Chennakeshava Reddy’s rivals hack his entire family members to death. When their bid to kill Chennakeshava Reddy falls short, they wangle some false case against him and send him to Tihar Jail. However, Chennakeshava Reddy's wife Sita (Tabu), younger son Bharat (Balakrishna) escape the attack by Venkata Reddy and his men with the help of his follower and reache Mumbai.
Chennakeshave Reddy starts taking revenge on his rivals one after the other and there happens to be none to dare Chennakeshave Reddy in the Seema. In order to counter him Dhanunjaya Reddy gets Bharath posted in Seema. The movie continues with the son the chasing father to arrest – father moving ahead in his mission revenge