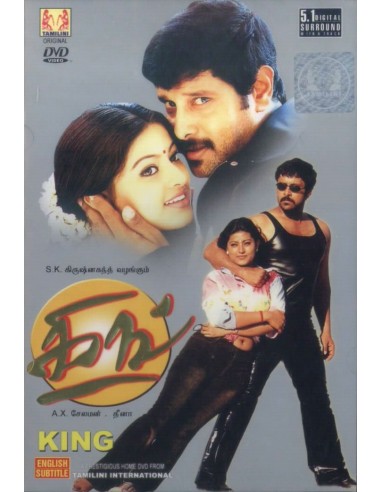 Raja and his dad, who live in Hong Kong, are devastated when an accident leaves Raja's father on the verge of death. He decides to reunite his father with his grandfather in order to make them happy.

The story evolves around Raja (Vikram), a business management student and professional magician living in Hong Kong with his single-father, Shanmugam (Nassar ), who he loves a lot. Then one day, they end up in a car accident, and when Shanmugam is in need of blood, he is given an unanalyzed amount of blood which was infected with multiple sclerosis. Dr. Cheenu suggests to Raja that he take his father to his old home in India, and to keep him happy for the last 2 months of his life. It is then that Raja finds out that Shanmugam was exiled from his home 25 years ago because he had a love marriage. But all that changes when the family meets him again, and when they meet Raja for the first time. However, Shanmmugam's father still doesn't talk to his son until Raja threatens him by attempting suicide. It is around then that Raja meets his crush, named Tamil (Sneha). It is revealed that Tamil's father and Shanmugam were good friends, and he gives her a picture of him with her father. Shanmugam also says that Tamil is the ideal daughter-in-law. Meanwhile, Raja is doing a countdown of his father's life, trying to express his love to Tamil, and entertaining his cousins. It is then revealed in the film that it was Raja who was infected with multiple sclerosis, and Shanmugam persuaded Dr. Cheenu, who is also a good friend of his to lie to Raja, and the doctor has been trying his level best to find some form of treatment for this incurable disease. A month after he was diagnosed, Dr. Cheenu called saying the symptoms will start arising within Raja, which consist of headaches, colour blindness, and a hole appearing in his vision. Raja realizes something is wrong and his doubts are cleared in a telephone conversation with Dr. Cheenu, and using his ventriloquist abilities, he talks to the doctor while imitating his father's voice, but Shanmugam and Dr. Cheenu don't know that the secret is out.