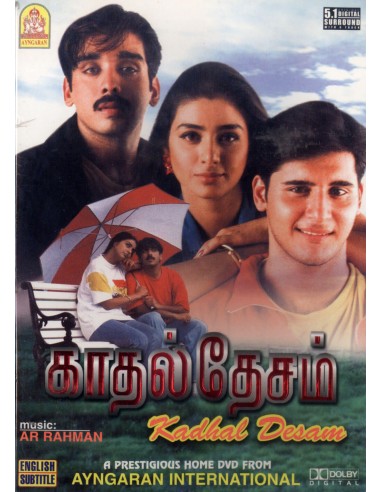 Two boys from rival colleges, one rich and the other poor, become good friends after an incident. A new girl in college makes both their hearts melt but neither realises that they love the same girl.

In Chennai, a traditional rivalry has always existed between the students of Pachaiyappa's and Loyola colleges. Karthik (Vineeth) is a poor orphan who studies in Pachaiyappa's College, a hobo in a rented room, travels by the bus, hangs out with a number of friends, and is the captain of his football team. He is also a good poet and daydreams about his dream girl. Arun (Abbas), on the other hand, comes from a rich and wealthy family, studies in Loyola College, drives his own car, hangs out with numerous friends, and is also the captain of his football team. In a nasty intercollege riot, Arun saves Karthik's life. So in return, Karthik lets Arun win in a soccer game because he thinks Arun can't take losses easily. Arun realizes that the victory is because of Karthik's sacrifice.

They become good friends, setting a good example of friendship to others in their college. Things go smooth until a new girl Divya (Tabu), joins the college. Both Arun and Karthik fall in love with her, but neither of them realizes that both are in love with the same girl. Following a sequence of events, when they realize that both are loving the same girl, their friendship is strained, and they fight with each other. The end of the movie shows whether Divya will fall in love with one of them and whether their friendship will be affected forever. At the end, Divya says that she likes them both but does not want to choose one, thereby losing the other and disrupting their friendship. Hence the film ends with Arun and Karthik regaining their friendship and staying friends with Divya.