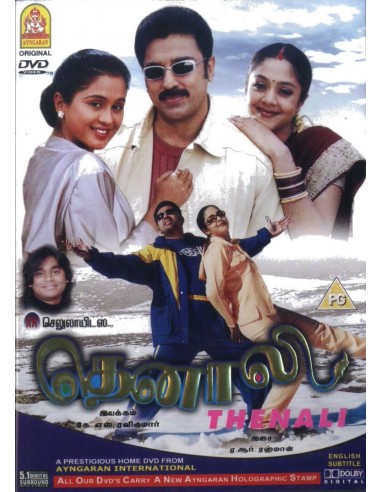 Synopsis:
Thenali Soman (Kamalhassan) is a man who is scared of everything - a carryover from his life in Ceylon. He is a patient of Dr.Panjabootham ('Delhi' Ganesh), a psychiatrist whose only aim is to smear the reputation of Dr.Kailash (Jayaram), a fellow psychiatrist but much more popular. So Dr.Panjabootham foists Thenali on Dr.Kailash, who is on a vacation alongwith his wife Jalaja (Devayani) and two children. Thenali endears himself to the family and falls in love with Kailash's sister Janaki (Jyothika). Kailash tries to get rid of him but his plans backfire as Thenali sees them as part of his treatment that is being effective in curing him..