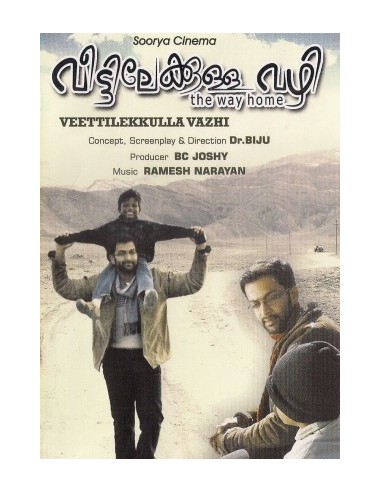 Synopsis:
There are just a handful of stories in this world. You tell them once, and then everything that is left is just retelling. And yet, a few manage to grab our attention by the way they express themselves, and you feel you have never heard this one before. Veetulekkula Vazhi is one such film that makes you want to believe in it, though in parts.Here is a doctor without a name (Prithviraj), who takes upon himself a strange task - that of delivering a young boy to his father, who doesn't even know he has a son. The father happens to be a dreaded terrorist Tariq, and the doctor has his own reasons for embarking on this voyage.

The message that the film carries is loud and clear. There is no ambiguity about it at all, and in no time does it state that the hate in the world is without a reason. There is even an argument between the doctor and Razaq (Indrajith), a terrorist, on the futility of it all. Razaq cuts it short with a remark that this discussion is headed nowhere, and its better hence that they stopped bickering over it.