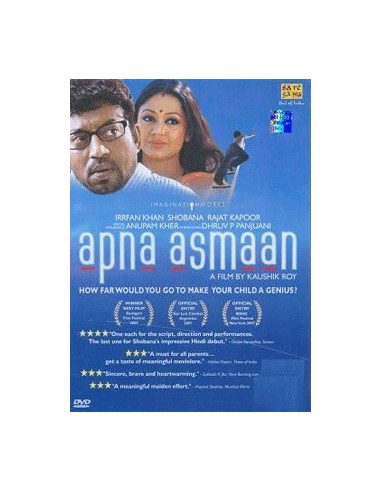 Synopsis:
Ravi and Padmini share a strained relationship due to their teenage son Buddhi's intellectual handicap. Buddhi, a mildly autistic slow learner displays his flair for art but his parents, with their middle-class insecurities, neither recognize nor encourage his talent. Driven by Padmini's social insecurities and Ravi's guilt for dropping Buddhi as a baby, the parents chase an unreal dream of seeing their son as a normal good student who, like others, must become an engineer or a doctor. While Dr Sen, the neurologist, tries hard to make Padmini accept the reality, Ravi's accidental meeting with Dr Sathya - the maverick scientist, leads him to the experimental "Brain Booster" that can make Buddhi a genius. The magic drug has a side effect - Amnesia, which Ravi thinks is a blessing since Buddhi has no good memories to talk about. Initially, Ravi hesitates to administer the drug but one night, in an inebriated state, he is sufficiently provoked by Padmini to inject Buddhi with the Brain Booster. The immediate effect seems like the end of their son's life but he eventually recovers from the shock to emerge as a newly born Buddhi - smarter, brighter but very confused and aloof. While the parents celebrate their new life, they overlook the consequences of a child who has no emotional bond with his parents. As Buddhi begins to show signs of being a genius, news breaks out about Dr Sathya's dark past and the ill effects of his magic Brain Booster. Soon the parents then begin to realize the perils of transforming their son to someone that he was not meant to be.