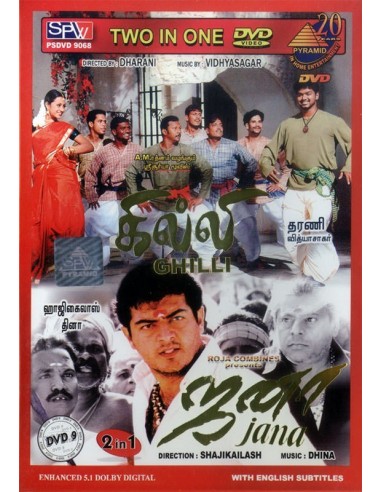 Vijay, son of a police officer played by Ashish Vidyarthi, is a happy-go-lucky youngster who spends most of his time playing kabbadi with friends.While going for a tournament in Madurai, he comes across Trisha, who is being tortured and kidnapped by an influential landlord Prakashraj, son of a State Minister. Prakashraj wants Trisha to marry him by threatening her.Vijay steps in to save her. After a tiresome chase, he manages to reach Chennai with Trisha. Meanwhile, Prakashraj follows him to the city and zeroes in on Vijay and Trisha. However, Vijay manages to procure passports and visas for Trisha and sends her to USA. Only after leaving her in the airport, he realises that he had fallen in love with her.

Janardhanan lives in a village in Tamil Nadu, leading life incognito, taking up the cause of the villagers, making enemies around. And then comes the twist in the tale, the caption in the interval reading...'Interval...Wait just see other face'. And when the film re-opens we do get to see the other face of Jana. Jana, a terror to the Mumbai dons, corrupt politicians and their ilk, killing, maiming and teaching a lesson to them. Both the faces of Jana merge finally, when his bete noire Bhandari, out of jail, comes to the village to have his final round with Jana.