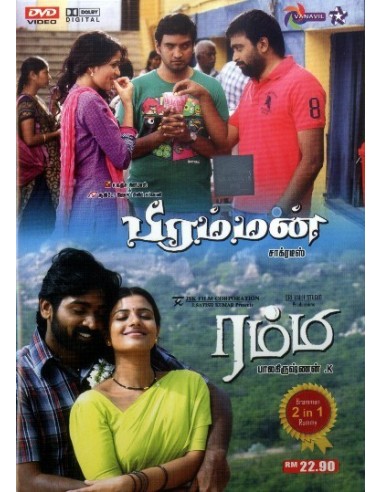 BRAMMAN
Subtitle : English
Siva (sasikumar) who hails from a rural backdrop and he has a theatre which he wants to run at any cost. In that process, he decides that he would search for his childhood friend Kumar (naveen) so that his theatre can be saved. He has also got another friend (santhanam) in this search. In between, he also comes across a beautiful girl Gayathri (lavanya). Whether he is successful in saving his theatre forms the rest.

RUMMY
Subtitle : None
Sakthi (Inigo Prabhakaran) joins a college in Sivagangai, where he meets his classmates Joseph (Vijay Sethupathi) and Meenakshi (Gayathrie). Sakthi and Joseph are hostel roommates and are very close. Meanwhile, Sakthi falls in love with Meenakshi, who happens to be the daughter of Periyavar (Joe Malloori), the headman of a nearby village. Periyavar and his family show at most casteism and go to the extent of killing anyone involved in an inter-caste marriage. Meenakshi fears for her father as he might kill Sakthi if he gets to know about her love. Sakthi and Joseph get expelled from the college hostel following a fight with another classmate, and come to Meenakshi’s village to stay. Joseph meets Swarna (Aishwarya Rajesh) in the village and develops a liking towards her, for which Swarna too reciprocates. It is revealed that Swarna is actually Meenakshi's elder sister. Periyavar finds about Swarna’s love affair and sets the stage to kill Joseph. However, Joseph and Swarna elope from the village and get married with the help of Sakthi and Meenakshi. Periyavar’s henchmen trace their location and beat up Joseph. In the process, Joseph is killed, and Swarna is taken back to her village and locked up in a room. In the meantime, Periyavar finds about Meenakshi's love affair and sets a plan to kill Sakthi. An angered Swarna kills Periyavar with a sickle before he could kill Sakthi. Thus, Swarna sets a full stop to Periyavar’s honor killing practice. Sakthi and Meenakshi get united at the end.