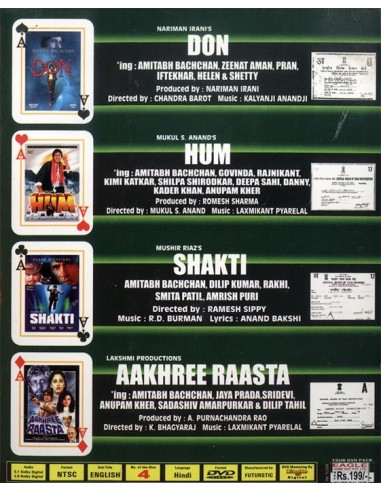 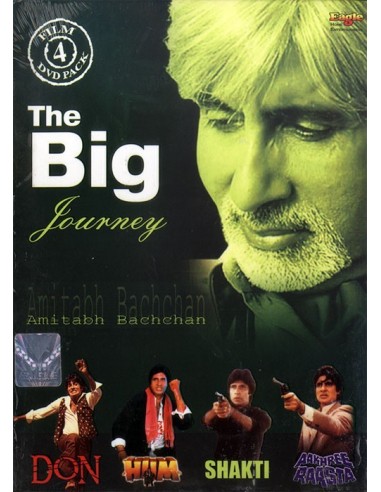 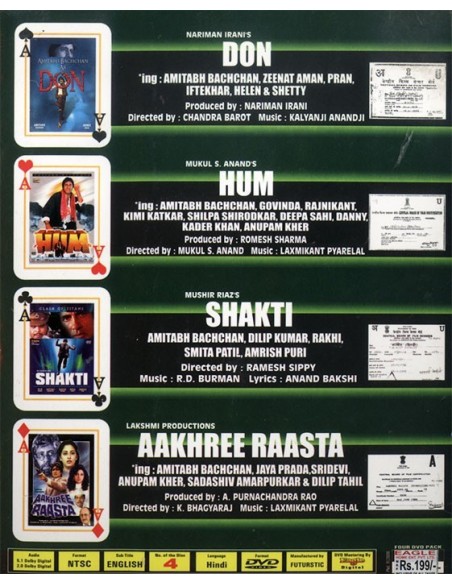 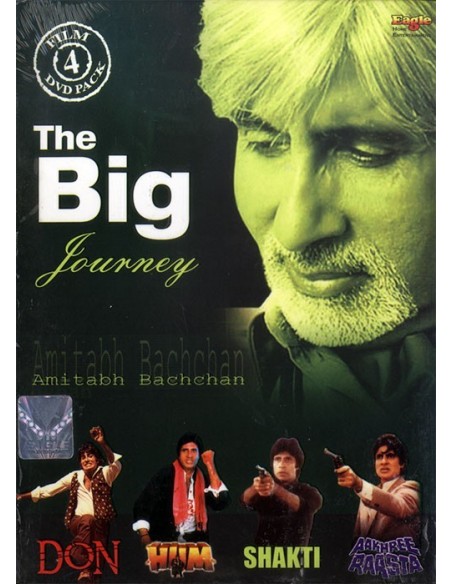 The Big B Journey - Coffret 4 DVD

Don
A ruthless gangster named Don is killed during a scuffle with the police. Since only DSP Desilva knows of this incident, he recruits another person named Vijay who is a spitting image of Don. Vijay is planted in Don's place in Don's gang and DeSilva has a plan to nab the entire gang in this way. But when Desilva dies during a raid, the secret that Vijay is not Don is also buried with him. Now Vijay is on the run - from the police and the criminal gang - and has to find the last piece of evidence to prove his real identity before it is too late.

Hum
A wealthy and cruel businessman, Bhaktawar lord over a dockyard making all the workers his slaves. All the workers will work but no one will entail a salary, the union leader Tiger opposes this and protests and is eventually silenced by Bhaktawar. Tiger is unable to take any drastic step against Bhaktawar because Pratab, Tiger's dad is Bhaktawar bodyguard. Taking advantage of Tiger weakness, Bhaktawar eventually murder Pratab publicly thus enraged Tiger who eventually murder Bhaktawar, setting the dockyard on fire and escape from the police. Years later Tiger is now known as Shekhar, a respected man with two brothers Kumar and Vijay. Tiger must now ensure that his past life is buried and ensnared a bight future for his two brothers.
Genre: Action, Drama
Avec: Amitabh Bachchan, Rajnikanth, Govinda, Kimi Katkar, Deepa Sahi
Réalisateur: Mukul Anand

Shakti
A scrupulously honest cop refuses kidnappers' demands at grave risk to the life of his son. The son is rescued but lives forever scarred by his father's willingness to sacrifice his own son for the sake of his principles. This works out to devastating effect when the son grows up to be a Mafia don, and his father is assigned the job of bringing him in.

Aakhree Raasta
David is an old prisoner, released after twenty-four years in a penitentiary for a crime he hasn't committed. The three men who framed him and sent him away, are now prominent citizens of his town. David walks out of the prison straight into a confessional booth at his church. He tells the priest that he is about to kill three prominent men, for which he seeks God's pardon in advance. He must find his old friend, bootlegger and the custodian of David's only son. David had believed in his friend to bring up his son as the worst criminal and seek revenge from the men who put him away. On meeting him, David finds that his son is a Cop instead. Devastated, David continues on his own. When he is about to kill the three men, his son has vowed to protect the citizens under any circumstances. David and his son are at war, personally and the smarter of the duo would win.
Genre: Action
Avec: Amitabh Bachchan, Sridevi, Jayapradha, Om Shivpuri, Anupam Kher
Réalisteur: K. Bhagyaraj