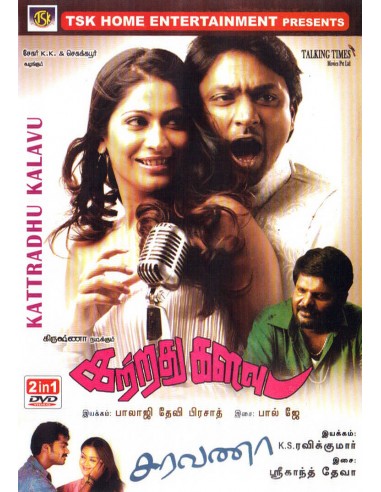 KATTRADHU KALAVU
Singam (Kreshna) gets cheated out of an original idea of his by a prominent person in the society. He decides to stop pleading and start threatening. He begins with a plan to corner the big shot. He meets Krishnaveni (Vijayalakshmi), who has left home and needs fast money. With a common purpose, they soon become partners and work out a plan. They blackmail the big shot with videotapes that they threaten to release all over the media if he refused to pay up. Buoyed by the success of their maiden outing, they decide to become con artists. They are successful in various ventures and finally end up blackmailing a minister. The minister, after initially caving in to their threats, decides to settle scores. What happens next forms the rest of the story.

SARAVANA
Saravana (Silambarasan) and Krishna (Krishna) are close buddies in college. Saravana sees a video tape of Krishna's sister Sadhana (Jyothika) studying in London and falls in love with her. So to meet her, Saravana goes with Krishna to a village near Tirunelveli where he finds that there is a bloody war going on between two warring caste groups. Krishna's brother Soundarapandi (Prakash Raj) his wife and Krishna are killed by the rival group of Dorai Singam. However Saravana saves Sadhana and takes her to Chennai. Initially Sadhana is not accepted by Saravana's large family but slowly when they come to know about her background they support and love her. The rest of the film is how Saravana tries to help Sadhana to go back to London, and in the process eliminates the entire gang of Dorai Singam single-handedly