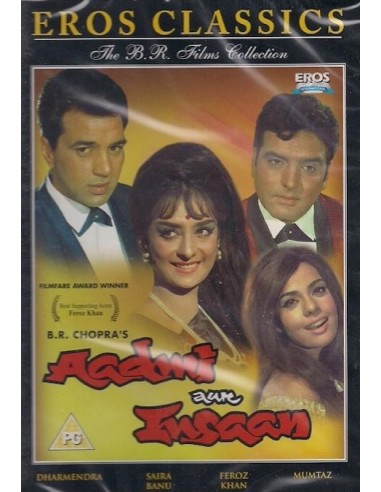 Synopsis:
Munish (Dharmendra) and JK (Feroz Khan) were friends, bound together in many ways. JK has helped Munish in his education, a trip to England for higher education and has now made him Engineer-in-charge for his prestigious dam project. JK's brother Ravi is engaged to Munish's sister. But these bonds of friendship are severly tested when Munish finds out that JK's vast empire is not built on totally honest business practices and refuses to support him. JK interprets Munish's behaviour as avenging the fact that JK loves his girl, Meena (Saira Banu), and expects Munish to give way for him in return for his favours. But Munish knows otherwise. He knows that though he loves JK dearly and would sacrifice his life, his love for him, he will not compromise on his principles. How will the conflict between emotion and principle be resolved? Will Munish have to choose between his heart and his conscience?

Aadmi Aur Insaan is yet another powerful film coming out of the partnership of B.R. Chopra with his younger brother Yash Chopra. Intense perfromances by a multi-star cast won this film 2 Filmfare Award nominations - Best Supporting Actress to Mumtaz and Best Supporting Actor for Feroz Khan who went on to win the award. The film's music composed by Ravi with lyrics by Sahir has such memorable numbers like "Dil Karda O Yaara Dildara", "Zindagi Ittefaq hai" and "O Neele Parbaton Ki Dhara".