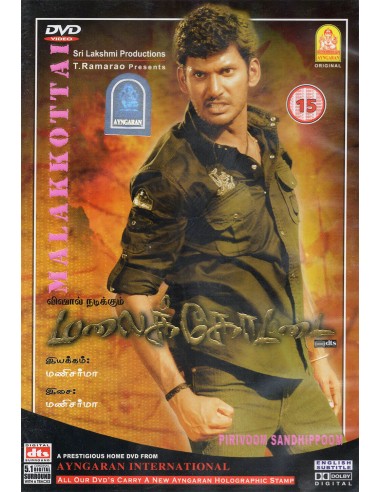 Anbu gets into a fracas with a local politician and his comic henchmen while trying to save a friend and is arrested.

Anbu (Vishal) is a happy go-lucky guy, who lives with his family in Pattukottai and is having a good time singing energetic fast numbers like Kantha Kadamba.., along with his friends. One day he gets into a fracas with a local politician (‘Kathal’ Dhandapani) and his comic henchmen while trying to save a friend and is arrested and case registered against him. The local court gives him conditional bail, provided he signs the register in a Tiruchi police station!

On the way to Tiruchi police station, he sees a girl on a terrace (Motta madi) drying clothes and falls for her. It is love at first sight for Anbu as he becomes crazy about Malar (Priya Mani) a college girl, which leads to some hilarious situations. And in the police station where he has to sign daily is manned by his Chittappa Kanthaswamy (Ashish Vidyarti), a comic sub-inspector whose ex-lover Kamala (Urvasi) is the lady constable at the station. Anbu kindles the love life of his uncle and makes merry at Malar’s college leading to funny situations.

Meanwhile Tiruchi town is run by a powerful politician Palani (Devaraj) and his brother Guna (Ajay), who have killed the local RDO in cold blood watched by a huge crowd of onlookers! The brothers continue with their ‘dada giri’, till they clash with a brave heart! He is none other than our Anbu, who while trying to save Malar from a difficult situation ends up getting the wrath of the brothers. Anbu, the one-man army does a good demolition job and cleans up Tiruchi of all its baddies!