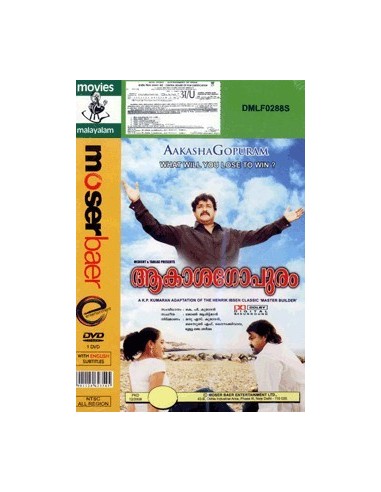 Synopsis:
Akasha Gopuram is set in London among the Indian immigrant community and tells the story of ALBERT SAMSON (MohanLal), a middle-aged architect who has who has clawed his way to prominence. His single-minded focus on his job, however, has hardened him and prevented him and his wife ALICE (Swetha Menon) from having a meaningful private life. The costs of Samson's ambition are also symbolized in his assistant, ABRAHIM THOMAS (Bharat Gopi), Samson's former employer whom he "scalped" to reach the top. Thomas, now dying, wants his son ALEX (Manoj K Jayan) to have more independence in the firm. Samson, however, fears that he will be eclipsed by a younger generation of architects, and refuses to allow Alex either to design original houses or to leave the firm and strike out on his own. Into this tension comes HILDA VARGHESE (Nithya), a vivacious young woman who has idolized Samson since ten years before, when, in the early stages of his career, he had built a large church in her hometown and climbed to the top of its tower during its dedication ceremony. While in town, Samson had promised Hilda, then a girl of twelve, "a kingdom"; now, Hilda says earnestly, she has come to collect her kingdom. As Samson struggles with the destructive consequences of his monomanical pursuit and his growing fear that he has lost his creative powers, the mysterious Hilda helps him gain a glimpse of his former robust self. Known for his deep commitment to female empowerment through his films, K P Kumaran in Akasha Gopuram paints an intriguing portrait of one man’s consuming desire for success.