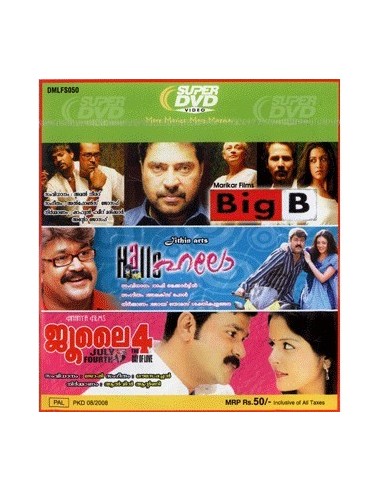 Synopsis:
Big B:
Big B begins with the murder of Mary Teacher, who has been a messiah for orphans. Mary John Kurishinkal, lovingly called Mary Teacher and Teacher Amma by many, is murdered on the street at night by some professional murderers. A young boy accidentally shoots this on his handy cam. Mary Teacher has been looking after lots of orphans, but she had brought up four such orphans as her own adopted sons. They are - Bilal, Eddie, Murugan and Bijo. While Eddie and Bijo live in Kochi itself, Murugan is a stunt-director in films and is always traveling. Bilal, the eldest, had left Kochi a couple of years back after being involved in a stabbing incident, following which Mary Teacher had refused to let him enter the house...
Hallo:
Mohanlal is Shivaraman, a once-brilliant advocate who now seems to be on a self-destructive mode. Almost al the time you're bound to find him in a highly intoxicated state. His clients had abandoned him a long time ago. But he has a very devout follower in Chaandy Kunhu, played by Jagadi Shreekumar. Whenever Shivaraman gets into one of his drunken brawls, it is Chaandy who rescues him. Strangely, that doesn't diminish Shivaraman's public relation skills. After one particularly bad fight, he ends up becoming good buddies with three notorious rowdies in the area- Vadakkanchery Vakkan, Batherry Babu and Pattambi Ravi, played respectively by Spatikam George, Bheeman Raghu and Kirikadan Jose. Soon, they too join his gang of loyalists...
July 4:
The story begins in a jail. Ramachandran, a very agile police officer takes charge as the Jail Superintendent. He is given a brief about the jail and the prisoners by Narayanan Potti, who is the jailer there. One day Ramachandran comes face to face with Gokul Das, one of the prisoners lodged there who is to be released soon, on July 4th. It is them revealed that the very reason why Ramachandran had taken charge of the jail is to meet Gokul Das, with whom he has some old scores to settle. From here unfurls, in flashback sequences, the story of Gokul Das. As a child, Gokul Das had no one but his mother to call his own and lived in a street and worked in a cycle shop. When one day he is picked up by the police along with other boys from the street for some crime he has not committed, things go berserk in his life. His mother comes to get him released but is raped and killed by the police officer in charge of the station...