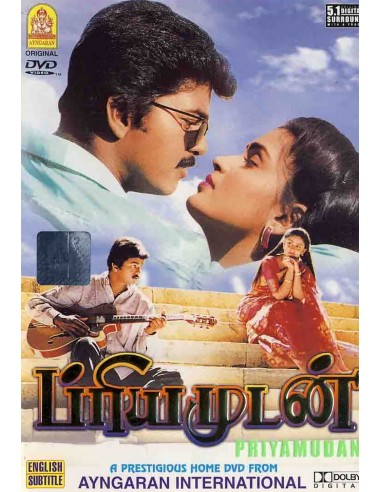 Vasanth, a wealthy businessman, falls in love with Priya during his visit to Rajasthan. To woo Priya, he impersonates a man named Vasanth Kumar who had saved her life before.

Vasanth is a son of a wealthy businessman from Chennai and grows up with a possessive attitude, and is almost considered as a psychopath by the audience. This is shown in one scene in a gift shop, where he breaks a gift which he likes solely as it had already been brought by someone else. He pays the owner to cover the damages but responds with a negative tagline - "If I can't get it, nobody can". He happens to visit Rajasthan, where he meets Priya and it is love at first sight for Vasanth. Priya is injured in an accident, and Vasanth's friend Vasanth Kumar rescues her by donating blood. Being unconscious, Priya does not know the face of her savior, only the name "Vasanth Kumar".

One day, Vasanth Kumar learns about Priya's and Vasanth's affair and greets them. Priya's father Rangarajan also learns about the affair but not about the possessive Vasanth. Vasanth and Priya go to Jaipur from Chennai to meet Rangarajan. While Priya is away from the home for a small work, Vasanth meets Rangarajan and admits the truth to him, but he refuses. Angered by his action, Vasanth kills him but later realizes his foolish mistake. CBI officers Muthukumaraswamy and Gopal begin to investigate the case.

One day, Vasanth Kumar comes to Jaipur for a music audition, which he had missed when he donated blood to Priya. Vasanth arranges room for him but fears that he might find the truth. He goes to the hospital where Priya was admitted and tears the certificate of admission. Vasanth Kumar sees this, and they go to a nearby hill station. Vasanth Kumar starts arguing with Vasanth for cheating his name. Vasanth apologizes and admits the truth, but Vasanth Kumar abuses Priya. He accidentally beats Vasanth but tries to save him. Having no way, Vasanth Kumar sacrifices his life for his friend's sake. Shocked by this incident, Vasanth decides to transform himself into a good gentleman and thereby leaves his behavior as that of a psychopath. Vasanth then sincerely starts to take care of Priya.

Meanwhile, Muthukumaraswamy and Gopal come to know that the real murderer of Rangarajan and Vasanth Kumar is Vasanth. Priya also learns about this and runs from Jaipur. Vasanth searches for her and is finally beaten by Priya for killing Rangarajan. After that, she notices her earring, which was taken by Vasanth when he first visited Jaipur. He tells her all the truths and the incidents. She feels sorry for him and decides to reciprocate his love. However, the police shoots Vasanth, and he dies immediately, unable to bear the pain. Priya bursts in tears. The film ends with a sad note with Vasanth advising the audience "not to live like him, because they will realize their terrific destiny".