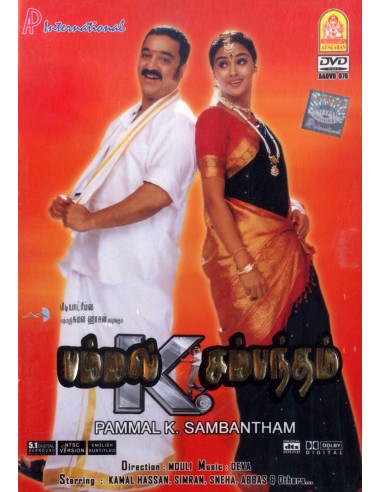 A single movie stuntman attempts to save the marriage of his hen-pecked brother.

When stuntman Pammal Kalyana Sambandham and a reputed surgeon Dr. Janaki come across each other at his younger brother Anand's and her best friend Malathi's elopement, they instantly develop a dislike for each other. They both have a very low opinion of the opposite gender, and also refuse to believe in the concept of marriage. Janaki, in particular, hates Sambandham for his uncouth manners and language. She gets Sambandham arrested when he argues with her at the police station over Anand and Malathi's marriage. Sambandham is eventually released on bail.

Anand and Malathi's marriage soon turns rocky as Malathi feels that Anand had lied to her over a job assignment in Australia before they had eloped. On the advices of Janaki, Malathi harasses Anand at every opportunity and makes him do the household work. On hearing about Anand's plight, Sambandham decides to fix the relationship by "hooking up" Anand with a woman named Vanaja in order to make Malathi jealous and a more caring and dutiful wife to Anand. But, unfortunately for Anand, Janaki makes Malathi to believe that Anand is cheating on her and forces her to file for divorce.

Meanwhile, Janaki tries to get Sambandham into trouble by barging into an movie shoot involving Sambandham and claiming that he is "involved" in animal cruelty since he is using a bull and a snake as part of the movie. In the chaos which was accidentally created by Janaki as she accidentally throws the snake on to the bull's head, the bull goes mad, the snake gets killed and the bull gores Sambandham in his stomach when he was trying save Janaki from the bull as it was trying to attack her. Janaki performs an emergency surgery on him and saves his life, but during the surgery, her prized possession (a wristwatch gifted to her by her aunt) falls into his stomach, which is detected by the X-Ray. She pretends to fall in love with Sambandham, with the intention to somehow sedate him and perform the surgery again to retrieve the watch. Sambandham, who is unaware that Janaki's watch is in his stomach due to a mix-up with another patient's X-Ray, mistakes Janaki's romantic overtures to be genuine, and falls in love with her. He also inadvertently foils all her plans to sedate him. Eventually, Sambandham provides another shock to Janaki; they are to be engaged at his grandfather's house at Pammal. During the engagement ceremony, Janaki finally manages to sedate Sambandham and retrieve her watch. Following the surgery, Janaki reveals the truth to Sambandham and ends their engagement, leaving Sambandham heartbroken. Sambandham's troubles increase when he realises that his grandfather had signed a legal document transferring his lodge to him once he is married. When his grandfather finds out that Janaki cancelled the engagement, he suffers a massive heart attack and dies. Meanwhile, Malathi and Anand manage to reconcile and get back together, cancelling their divorce.

Janaki feels guilty over being responsible for Sambandham's grandfather's death. She also finds out that Sambandam had decided to transfer the ownership of the lodge to her and convert it to an orphanage if they had got married, and on this revelation, she realises that she has fallen in love with him. She decides to confess her love to Sambandham, but instead she inadvertently convinces him to marry his relative, a weightlifter Rajeshwari "Raji", within the next two days, as he would lose the possession of the lodge if he doesn't marry by then. However, it turns out that Raji has no interest in the marriage and is in love with a Malayali boy. In a hilarious climax, Sambandham, Janaki, Anand and Malathi help Raji in eloping with her boyfriend, and Sambandham and Janaki too elope as well, thus ensuring that the lodge remains under Sambandham's ownership.