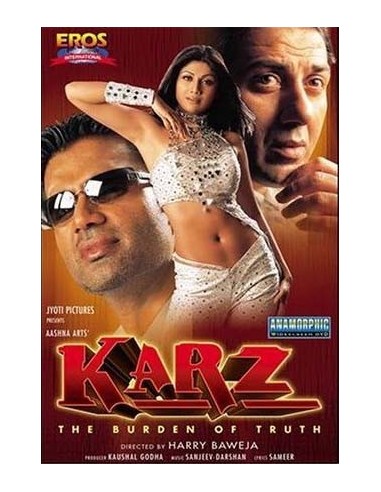 Karz - The Burden Of Truth DVD

Synopsis:
Police Inspector Suraj is an orphan, who was rejected by his biological mother, for reason(s) unknown. Suraj has grown up questioning as to how any mother could reject her own child. He meets with Raja, and after a few misunderstandings, both become fast friends. Raja introduces him to his mom, Savitri, who welcomes and accepts him. Suraj loves Sapna, and hopes to marry her someday. Unfortunately, he finds out that Raja also loves Sapna, and decides to step away, and takes to alcohol. When Savitri's mom meets prominent politician, Yuvraj, she recognizes him as a wanted criminal, Thakur, but Yuvraj denies being Thakur nor having any connection with Thakur. This leads Suraj to wonder as to what prompted Savitri to point a finger at Yuvraj. His investigation will lead him to his birth mother, as well as his biological father, and he will come to know why his mother rejected him.