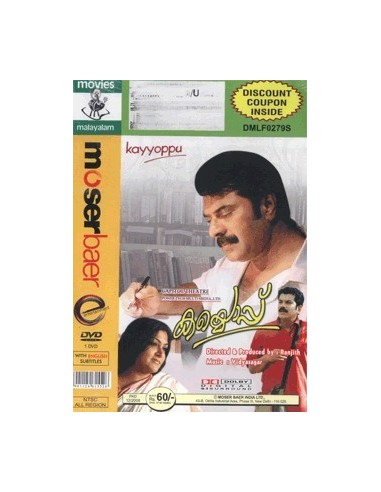 Synopsis:
Kayyoppu tells the story of Balachandran, who works as an accountant in a fertilizer company in Kochi and lives immersed in the world of books. He lives in a lodge in a room that is full of books. As far as literature is concerned, he is an encyclopedia and the passion that he has for books and reading amazes almost everyone, including writers. Even noted writers like C.P. Vasudevan are his fans. Once at a public function, C.P. Vasudevan mentions about an unfinished novel that had impressed him much. The novel was written by Balachandran who was present at the function. Sivadasan, a small time publisher and a lover of genuine literature, was also present there. Sivadasan follows Balachandran to his room and urges him to finish the book and give it to him for publishing. Balachandran agrees and tries to make a beginning. But things don't move the way he wants them to. He is afflicted with what is usually termed 'Writer's Block' and fails to write even a single word. In the meantime, Padma, who was once his classmate in college and a fan of his too, comes to stay in Kozhikode. Padma, who is divorced from her husband, is a great lover of literature. She gets Balachandran's number and calls him. The entry of Padma into Balachandran's life changes things to a very great extent. It marks the beginning of a new chapter in Balachandran's life. What happens from then forms the plot of Kayyoppu.