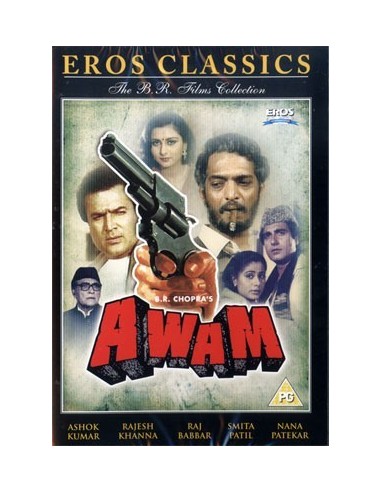 Synopsis:
Every country is only as good as the people living in it... B. R. Chopra's 'Awam' is the story of people who are willing to lay down their lives to fight any danger to their country.
Captain Amar, the son of a freedom fighter is posted to Delhi. He is employed as the P.A. of Jagrattan, the Minister of Defence Purchases on the recommendation of Mohanlal, his father's friend. Mohanlal opens his home to Amar and its there that he meets Sushma and falls in love with her.

On meeting Colonel Zaidi, Amar learns that this posting was a front for him to uncover a spy ring that was endangering the country. While Amar gets too close for comfort, the spy ring kills Jagrattan, who leaves a vital clue behind. Now, Amar has to peel through layers of deceit to unmask the real traitors and stop them before they destroy his beloved country. Smita Patil and Raj Babbar also star in this multi-starrer.