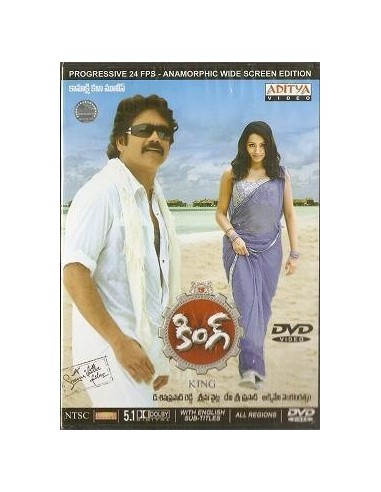 Synopsis:
Chandra Pratap Varma aka King (Nagarjuna) hails from a royal family and he takes over the legacy and riches after the death of his father Raja Varma (Sobhan Babu). The big league of the members in the family includes uncles and aunts. All of a sudden, a ravishing beauty Swapna (Mamta Mohandas) comes into the family, threatening to displace the King. Running parallel to the royal story, another thread is incorporated through the episode of Bottu Seenu (again played by Nagarjuna), who falls in love with a singer Sravani (Trisha), who in turn gives her heart to an IT brilliant Sridhar (Nagarjuna). What all this fuss? Does the hero enact triple roles by himself or are they different from each other? It forms the crux and suspense of the movie. Juxtaposing his earlier film Don, wherein Nag's continuous presence on the screen was mired by Lawrence (leading to a big criticism), here, King comes alive with Nag dominating the entire film from the start to finish, frame after frame. Nag looks young and his glamour is matchless though he crossed 50. Nag's triple characterizations come as variety to the audiences and all the numbers are entertaining smeared with hilarious comedy.