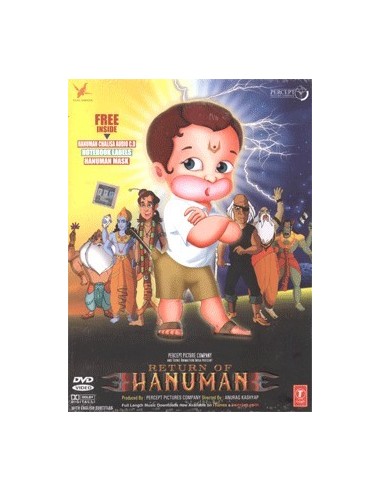 Synopsis:
Return of Hanuman (previously Hanuman Returns) is a sequel to Hanuman. It is being produced by the Percept Picture Company and is being directed by Anurag Kashyap. Music is done, once again by Tapas Relia. The film is a children’s film, and has been rated as an Educational Film by the CBFC because it deals with the issue of Global Warming. Millions of years ago… the armies of demons led by their general, Rahu Ketu, are ready for the mother of all battle against the god.As the bugle is sounded, the two army’s charge at each other & are locked in fierce combat.Rahul Ketu creates havoc amidst the hapless armies of the god. fortunately, to the rescue come lord Vishnu and throws the demons into space along with their guru, Shukhracharya, whose body then takes the shape of planet Venus a.k.a Shukra-Garah.Shukhracharya curses humankind with a most terrifying fate;” that mankind would be destroyed by the creature created by its own sins”. Cut to the present.Hanuman wakes up and on a sudden impulse goes around the world.A child at heart, he sees kids enjoying themselves and expresses his wish to Brahma to make him a kid again.Brahma agrees and Hanuman is born to a pundit and his wife, Shiela.Holding the cutest kid in the world, hanuman earthly parents instantly realize that is no ordinary child, but an avatar of lord Hanuman and hence he is named Maruti.Maruti is different from the other kids.He begins walking by the time he is one month old and talking by the time he is three months old. The one thing that troubles his parents the most is his insatiable appetite!Maruti starts going to school and immediately makes friends, while setting the record straight for the bullies.Many wild & zany escapades follow, as Maruti cannot seems to keep away from trouble.En route, he manages to get the better of the bad guys, who hatch a plan to capture him.They manage to capture him but they have not reckoned with Maruti’s friends around world.Maruti’s rescue sets off another chain of events, which finally snowballs towards fulfilling Shukhracharya evil prophecy, made millions of years ago….The fate of humankind now rests on the shoulders of young Maruti….