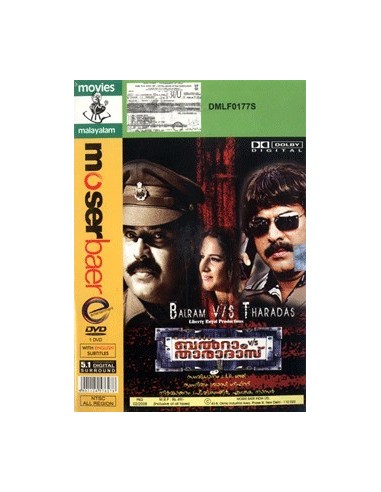 Synopsis:
The story revolves around a box of arms discovered in an area under construction, leading to complications with a criminal-police-politician nexus. Mammootty plays Balram, the no-nonsense police officer, one who figured in "Aavanazhi" of the 1980s. Promoted in this film to the post of a deputy superintendent of police, he is given the charge of investigating the arms case. The evidence leads to Tharadas, played again by Mammootty as the suave smuggler of the 80's hit, "Athirathram", who has now become an international criminal. The character of Tharadas lacks emotional depth. Even his love for Supriya, played by Katrina Kaif, which was supposed to be the pivot of the story, appears artificial. Just a song picturised in Dubai to indicate romance does no justice to the sub-plot. Mammootty's performance, which can't be rated top-class, does rise to the challenge of playing both the parts without faltering even if Katrina is reduced to eye candy. The supporting cast - Mukesh, Jagdeesh and Kalpana - render noticeable performances. Young actor Arun, politician-actor Rajmohan Unnithan and Siddique, too, play their parts with ease. The overall treatment is reminiscent of the 80's potboilers with a potpourri of various ingredients. Also, the film brims over with an abundance of locations and characters. Though the locales spell lavishness, the action sequences lack choreography. However, the film is technologically superior to other contemporary releases and is even touted as the most expensive movie made in Malayalam.