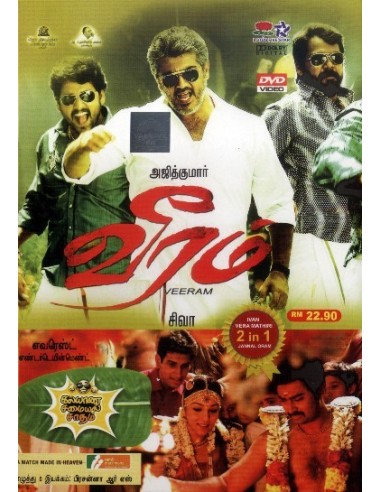 
Synopsis:
Veeram
Vinayak (ajith) who has younger brothers and for their upbringing he doesn't marry. In comes Pichai Muniyandi (santhanam) his friend to ensure that Vinayak falls in love. The girl in focus is Kopurendevi (tamannah) and with her support and various plans Muniyandi and Vinayak's brothers do various things to ensure he falls in love. And finally it happens but then a twist occurs. What happens after that forms the rest of the story.

Kalyana Samayal Saadham
Meera (lekha) who is brought up with the mindset of finding a perfect groom in her life and settle down. She sees that in Raghu (prasanna) and develops an instant liking. They get engaged and marriage is fixed eight months later. But this is the period which is a challenge for Raghu as he has to impress Meera in a big way. At the time of marriage, an unexpected discovery is made and what happens from there forms the rest of the story.