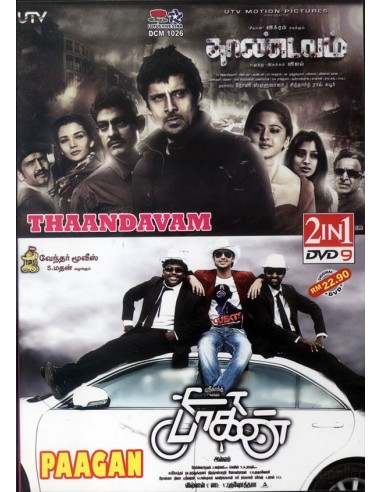 
Synopsis:
THAANDAVAM
The story begins with the RAW officer Kenny (Vikram) who gets married to Meena (anushka). Life is going fine till Kenny is assigned the task of uncovering a terror plot which leads to London. However, Kenny meets up with an accident and goes blind. Still he doesn't give up the chase and in this process he gets help from Sarah (amy jackson) and a cab driver (santhanam). There is also his friend Arjun (jagapathi babu) who is associated with the plot. What happens after that forms the rest of the story.

PAAGAN
Subramani (srikanth) who is a happy go lucky youngster and his only love is his bicycle. For this, he is willing to do anything. Meanwhile, he along with his friends Velliyangari (parotta suri) and Makali (pandi) have dreams of becoming rich overnight but they don't want to work hard for it. However, they hatch a plan. According to that, Subramani should woo and make Mahalakshmi (janani) to fall in love with him. She is the daughter of a very big man and Subramani thinks he can inherit her property. However, the plans go awry and he lands in trouble. What happens after that forms the rest of the story.