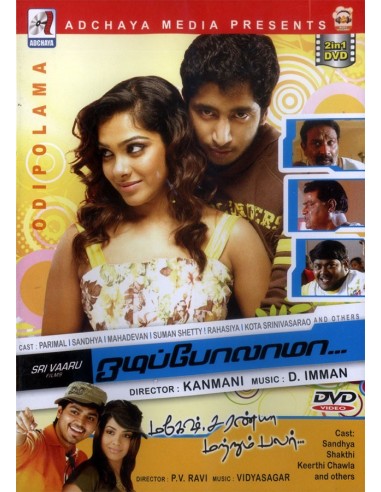 Synopsis:
Odipolama
Visu (Parimal), is a computer science student, who loves to spend time with his friends (led by Suman Shetty). Though he is initially portrayed as a book-worm, it is made known in later scenes that he is a happy-go-lucky youngster. Hailing from an affluent family, he lives his own life. He comes across Anjali (Sandhya), a computer science student. Visu falls in love with her. After locating her whereabouts, he moves close to her residence.But problems begin after he goes behind her. A series of events forces Anjali to elope. She takes the bus in which Visu travels. It appears that Visu and Anjali had eloped together, but that isn't. There are a host of interesting events and encounters between them that eventually ends on a positive note.


Magesh Saranya Matrum Palar
Mahesh (Shakthi) comes back to his family from Chennai where he is studying, for the wedding of his sister Keerthana (Saranya) whom he dotes on. He starts telling her about a girl Saranya (Sandhya) whom he accidentally meets and falls in love. Slowly, at regular intervals this narration continues as everyone on the large household joins one by one to hear Mahesh’s love story. Finally on the day of Keerthana’s marriage a twist in the story happens as Mahesh is forced to confess about the climax of his love story. When he was leaving, Saranya was brutally murdered by a rowdy. Mahesh goes after the rowdy and hacks him to death. But before he went to jail, he wanted to see Keerthana married. After the marriage occurs, Mahesh turns himself over to the police.