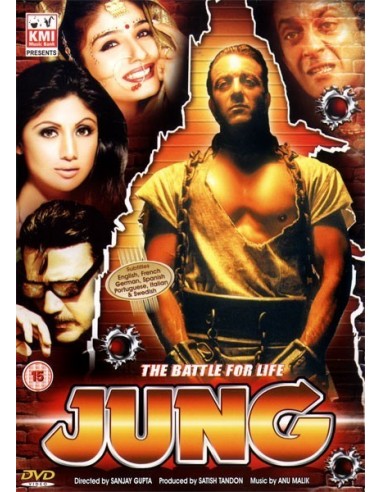 Jung - The Battle For Life DVD

Synopsis:
Police Inspector Veer Chauhan is a honest and diligent man, who lives in India with his wife, Naina, and a son, Sahil. While Veer likes to go by the book, his partner, Inspector Khan, is exactly the opposite, reckless, and trigger-happy. When Veer is told that his son requires a bone-marrow transplant, Veer does his best, but is unable to come up with any donor, and is told that Sahil may not live long. Veer finds out that the only bone-marrow transplant compatible with that of Sahil is that of jailed criminal, Balli. The only problem is Balli is not likely to even consider donating any organ of his body, as Veer was the one who had arrested him. A short while later, Balli appears to have a change of heart, agrees to be a donor, and is transported to the hospital, but escapes. Now with time running out, Veer must locate Balli - that is if he is not shot dead first by Khan.