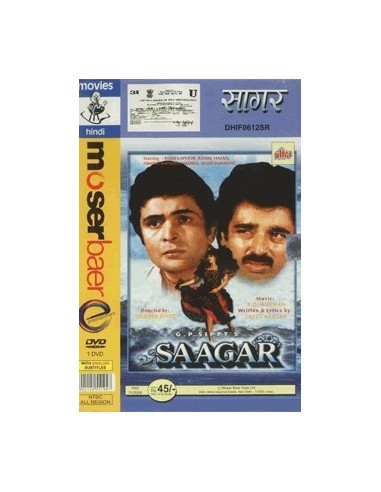 Synopsis:
SAGAR(Sea) is the story of a peaceful little village by the sea where a tavern owner's daughter Mona(DIMPLE KAPADIA) stirs up a fierce storm of passion, romance and turbulence and engulfs the entire village. Mona, grows up in the companionship of Raja(KAMAL HASAN)- joyous Raja, a picture of fun & friendship, her childhood friend. Raja has always loved Mona, but never lets her know how fiercely he loves her and dreams of a future with her. Not far from the village lives the haughty millionairess Kamladevi whose sole heir, her grandson Ravi(RISHI KAPOOR) comes to live with her. On a memorable dawn, Ravi stumbles upon a venus-like beauty arising from the sea, and time stands still. Ravi mingles with the fishermen and becomes a good friend of Raja, and a well wisher of the village, much to kamladevi's unliking. Ravi & Mona attain new heights of romance & ecstacy. Little does raja know that Ravi, his friend, is also dreaming of the same Mona-his Mona, his only reason for living. Then fate takes a cruel turn. The villagers rebel against Ravi. Why? Mona Agrees to marry Raja. Why? Ravi rebels against his grandmother Kamladevi. Why? When Ravi discovers that his best friend loves the very same girl whom he loves - what does he do? When the waves of SAGAR roll back they take something with them, something precious. SAAGAR marked the return of Dimple Kapadia after her debut in BOBBY several years back. SAAGAR features excellent music by Maestro R.D. Burman, and powerhouse performances by Kamal Hasan and Rishi Kapoor.