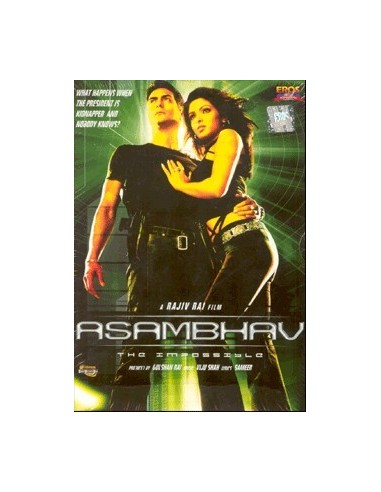 Synopsis:
Familiar sounds reverberate across the Locations and Sets as the Pasha of action and thrill… 'Rajiv Rai' takes stage and the curtains go up on the filming of his new film "Asambhav" - A Spy Espionage Drama promising entertainment, glamour and visual wizardry of the highest order. Featuring Naseeruddin Shah, Arjun Rampal and others, the film is being filmed completely on location at Ticino, Switzerland, the first Indian film to explore the hitherto unknown location, in the longest filming schedule of any Indian film unit in Switzerland (2 months / 60 days). Music by Viju Shah, Lyrics by Sameer and Cinematography by Sukumar Jatania add the necessary technical finesse to the film. The film narrates the story of Aadit Arya (Arjun Rampal), a Captain in the Indian Army on an undercover mission to Switzerland. The high action drama and danger of an undercover mission, the twists and turns, the underlying tension, the escapades and the chases accompanying the glamour and oomph, all form a part of the story providing edge of the seat entertainment to the viewer. In our attempt to provide an insight on to the filming we now turn the clock backwards for you to follow Captain Arya's Mission - 'Asambhav' providing a day to day account of the filming. The first Indian film to invite you to be a part of our unit... to be a part of Mission - 'Asambhav'.