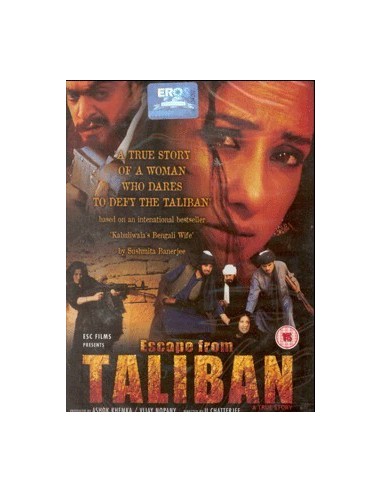 Synopsis:
Based on a true story, Escape from Taliban is a riveting drama that confronts the unspeakable truth of Afghanistan under the rule of the Taliban. Sushmita is a young woman from India who falls in love with a handsome Afghani. Abandoning country, community, and family, she follows him to his homeland. Jaanbaz,her husband, eagerly describes the wonderful life they will share and the family they will raise in the hilly terrain near Kabul. Sushmita believes she has never been happier in her life,but she will soon discover that in following her heart to Afghanistan, she has made the biggest mistake of her life. In Afghanistan, Sushmita is confronted with a horrific new reality. Under the rule of the Taliban, women are considered commodities whose sole purpose is to bear children. Sushmita"s respect is crushed as she is forced to cover herself completely and instructed to be compliant and meek.At first, SushmitaÕs love for Jaanbaz makes the ill treatment bearable. But one night, Sushmita discovers her husbandÕs terrible secret, and reliazes that he,too,has considered her little more than a commodity all along.The love she thought they shared out to be a lie. Trapped in a loveless marriage in a suffocating, intolerant socity, Sushmita makes an unlikely and courageous decision. She resolves to reclaim her lost freedom or die trying. Join Sushmita on her courageous journey to escape the snares of the oppressive Taliban society and return to her homeland. Follow her as she challenges Afghani society through subversive meetings with other women. Watch the conflict escalate until the Taliban ultimately deliver a fatwah-a death sentence-against her and witness the heroic role the Afghani women play in her struggle for freedom. Sushmita's story is one that you will never forget.