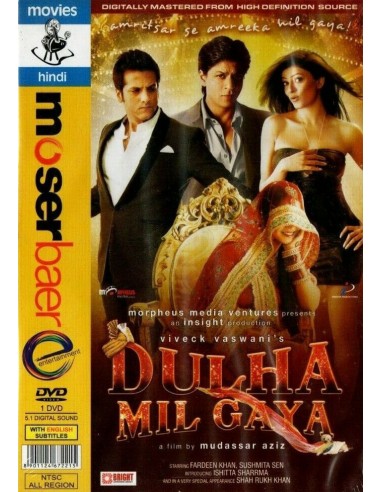 Dulha Mil Gaya is a heart-warming tale of four individuals, each of them have different takes on relationships in their lives.

The story focuses on Donsai (Fardeen Khan), the heir to Dhanraj Empire. Donsai is extremely against marriage and believes one should never ruin his life by getting married. After the passing of his father, Suraj Rattan Dhanraj, the only way to inherit his father's five-billion-rupee company, is to marry his friend's Punjabi daughter, Samarpreet (Ishita Sharma). Donsai gets married in Punjab, and tells Samarpreet that he will return to Punjab after three months of business, though Donsai plans not to come back.

After three months, Samarpreet comes to Donsai's home in Trinidad and Tobago to look for him, where she finds him with another woman. She runs out crying, until she is hit by a car. The car owner, Shimmer (Sushmita Sen), picks her up and takes Samarpreet to her home. When they get to Shimmer's home, it turns out Shimmer is one of Donsai's best friends. After Samarpreet gains consciousness, she tells Shimmer everything Donsai did to her. Shimmer decides to help Samarpreet and gives her a complete makeover—she even changes her name to "Samara".

After Donsai sees Samara (not knowing that she is his wife), he falls in love with her, and asks her out. Shimmer tells Samara to reject him; she accepts. Donsai then meets her at a yacht, where the two begin a conversation, and slowly Donsai decides to marry her. At the same time, Shimmer's plan is ruined, due to her boyfriend Pawan Raj Gandhi (Shahrukh Khan) arriving unexpectedly for Karwa Chauth. Pawan realizes Samarpreet's problem, and offers to help out in the plan as well. Shimmer realises her feelings for PRG and she goes to meet him at the airport. At last Donsai accepts Samarpreet as his wife.